The other day someone shared an article with me that was posted on “The Guardian” website called “Why eating less meat is the best thing you can do for the planet in 2019”. Please go and give it a quick read before we go any further. Done? Good. Now, please completely disregard the conclusions as utter nonsense.

Okay, so that may have come across a bit strong, but although there is a lot of truth in the criticism of industrialised meat production and the call for concern over the devastating impact that it is having on climate change – I do feel that the proposed solution of us decreasing our beef and meat consumption by 90% will have catastrophic implications on an already dire situation. Less ruminant animals is simply not the answer!

We need more cows and sheep!

Or at least I should say, we need more ruminant animals being managed the right way. A ruminant animal is an animal that is able to convert plant matter (which is essentially stored solar energy) into protein through the process of rumination (bacterial breakdown of the plants) in their four stomachs. Included in this wonderfully complex category of mammals are cows, sheep, antelope, buffalo and even giraffes.

What the article does get right, in my understanding, is that industrial meat production is killing our planet. We cram thousands of cattle or sheep into small paddocks with bare ground or concrete, and then we feed them grain (which ruminant animals are not adapted to digest). The hard ground or concrete means that the poo and urine, which is deposited daily in large quantities, has no way of being metabolised into the soil. This filth either becomes the ground the cows walk on (and lie down in), or is sprayed and scraped into manure lagoons (big slurry reservoirs – fancy a swim anyone?).

And this manure load, unable to decompose naturally and biologically into healthy soil, begins to vaporise – releasing some of the toxic gases that are rightly being condemned as killing our planet. Then all this fermenting, toxic manure soup gets washed into our rivers, causing a secondary devastation to the environment. On top of all that, consider that the millions of tons of grain needed to run these operations are often grown hundreds of kilometres away, in a mono-culture fashion where artificial fertilisers, pesticides, herbicides and other chemicals are killing the soil, and resulting in large-scale soil erosion and loss of topsoil. Then the grain is transported via truck or rail – more gas emissions – to reach the cows. It is insane. Absurd. Yes, industrial meat production is devastating our ecology.

But the answer is not to eat less meat. The problem is not the COW, it is the HOW! 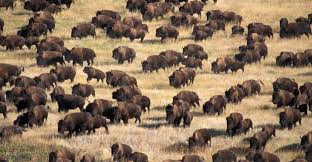 Just consider the logic of a long term view of the ruminant population of the planet. Early accounts of the American prairies describe herds of bison (a ruminant animal) that numbered in the thousands upon thousands, and it is estimated that around 1800 there were 20 – 30 million bison in North America! Some estimates about the pre-1800 population go as high as 60 million! The Pronghorn population at that same point is estimated at 35 million, the Elk population at 10 million. That is considerably more large ruminant animals, producing methane gas, than the number of cows in USA currently. The same is true in Africa, where there are over 180 distinct wild ruminant animals species! Early European explorers describe vast numbers of giraffe, wildebeest, kudu, buffalo and eland that stretched as far as the eye can see when migrating. Millions and millions of cow and sheep equivalents roaming the African plains way before we industrialised our meat production. And yet no ecological damage. Makes you think hey?

Let us come close to home; in a book called “The Plains of Camdeboo”, the Karoo region surrounding modern day Graaf Reinet is described as a self-sustaining grassland. Granted it was still dry and had low rainfall, but there was grass and very little bare ground. Imagine that: where there is now the arid brush of typical Karoo desert, there was once grassland mixed with the Karoo scrub. And what animals were there on that grassland, grazing and burping and farting around? Ruminant animals by the millions. Listen to this description of millions of springbok in one herd moving through the Karoo from Lawrence Green in his book called ‘Karoo’:

For three full days the springbok passed the village, and they left the veld looking as though it had been consumed by fire,

In 1896 S.C. Cronwright-Scheiner and two farmers, who were used to counting stock, surveyed the vast plain covered with springbok and attempted to make an accurate estimate. They counted by section and estimated 500,000 springbok in sight at that moment. But the herd covered an area 24km wide and 224km long! Cronwright-Schreiner declared, “When one says they were in the millions, it is the literal truth.”

Obviously these animals moved, and once the veld had been “consumed by fire” by a migrating herd, often a significant herd wouldn’t revisit that same area for a few years.

What happened to the Karoo?

But the Karoo isn’t a feedlot, so how did it change so drastically over the last 120 years? We don’t know exactly what the Karoo was like in its natural state, but we know that today it is badly damaged. The damage started when we interfered, and adopted conventional European farming practices in the Karoo. The current convention is to divide the farm into camps, using fixed internal fencing, and graze some camps, while others are left to rest. Then livestock is moved from a grazed camp to a rested camp every few months. Oh, and for good measure, eliminate all predators. The issue with the convention is that the sheep and cows aren’t incentivised to herd, ever. Herding is an instinctive mechanism through which herding animals confuse predators. In the absence of an incentive to herd (predators, shepherds, small camps, etc.), the grazing animals start to selectively graze, and the following – catastrophic – series of events occur:

This process just keeps viciously cycling, and over a period of years, leads to desertification at ever-increasing rates.

The problem is not the COW its the HOW.

We need to be raising our meat along regenerative agriculture principles, where ruminants eat grass (not grains) and are managed carefully in tightly bunched herds, grazing specific areas of veld for short periods of time – mimicking how these ancient herds would have acted all those years ago – and only returning once the veld has recovered through rest. This approach to farming regenerates our ecosystems closer to what they were when the environment naturally supported and thrived in synergy with millions and millions of ruminant animals! Especially in arid environments where rainfall is erratic.

This is the fence-line on the regeneratively managed Kroon family’s farm in the Karoo on the left, and a conventionally managed farm on the right. Same animals, same rain fall, same temperatures, same everything, but different land and animal practices, creating a completely different world.

We can literally heal the world while farming happy cows and sheep and eating nutrient-dense beef, lamb and mutton! Come on! What are we waiting for?!

However, the solutions the article makes are in the opposite direction. Take this terrible suggestion:

The suggestion is to stop eating meat and start eating more beans and pulses – this is what I often hear from vegans and vegetarians. However, what people fail to realise is that all those beans and pulses are grown on large scale mono-crop farms where large tracts of land are cleared, are doused with chemicals and fertilisers, killing the soil and leading to massive loss of top soil – ultimately also devastating our ecology. It is no better than the cows in feedlots, has nothing on regenerative agriculture, and certainly is not sustainable or healing of our environment. Decreasing our consumption of herbivores (including beef, lamb, mutton, venison, goats and even rabbit) is simply not the answer!

Rather, we as CONSUMERS need to be demanding meat that has been produced along regenerative agriculture principles. Not organic. Not free range. Not sustainable. You need to look for pasture-raised, regenerative meat. So how do you know if it is regenerative? In our Southern African context, you need to know how often the animals are moved! If they are not moved onto fresh pasture a few times a week (daily is best), then they are not regenerating the land. If their feed is being supplemented with grain, then you are not getting good meat. Cows or sheep left on one large pasture for a few weeks or months at a will cause degradation and start the process of desertification.

Do you want to save the world? Do you you want to be a part of turning the tide of global warming? Would you love to see the Karoo in its former health?

Then eat more meat that has been raised the right way.

A wildlife friendly half mutton meat box, portioned into freezer friendly cuts. Priced at R120/kg, this box is fresh-frozen.

A wildlife friendly half lamb meat box, portioned into freezer friendly cuts. Priced at R150/kg, this box is fresh-frozen.

A rack of Wildlife-Friendly, Ethically-Produced, Grade A Lamb Ribs from the Karoo. This cut has been Fresh Frozen.

A Wildlife-Friendly, Ethically-Produced, Grade A Leg of Lamb from the Karoo. This cut has been Fresh Frozen.

A pack of Wildlife-Friendly, Ethically-Produced, Grade AB Best End Chops from the Karoo. This cut has been Fresh Frozen.

A Wildlife-Friendly, Ethically-Produced, Grade A Lamb Stew Pack from the Karoo. (Bone in). Fresh Frozen.

A Wildlife-Friendly, Ethically-Produced, Grade AB Leg of Mutton from the Karoo. This cut has been Fresh Frozen.

A rack of Wildlife-Friendly, Ethically-Produced, Grade AB Ribs from the Karoo. This cut has been Fresh Frozen.

A Wildlife-Friendly, Ethically-Produced, Grade AB Mutton Shoulder from the Karoo. This cut has been Fresh Frozen.

One thought on “We need MORE, not fewer, sheep and cows”